Title image shared via CC license by RL GNZLZ on Flickr. Welcome to the fifth post in a regular series where we're going to be inviting members of our team to talk about One Cool Thing (not necessarily from games) and if/how it influences/reflects on their work. While we're not able to talk about the exciting things we're working on right now, we hope this will be a nice little series of introductions to the interests & practices of our excellent new team.

Here we have an entry from current collaborator Harry Josephine Giles. You can also check out Sharna Jackson on Joana Choumali, Angus Dick on Fantastic Planet, Ben Wilson on Leaderboards, and Char Putney on Randomness.

I stumbled into making games as a poet, as someone who loves doing twisty things with language. I think about poetry a bit like I think about magic: if you say the right words in the right order, it can make a change happen in the world, or at least in your mind. After all, if you change your mind then you change the world. I'd played games ever since I got a Commodore 64 aged 5, but I always thought of myself as a writer, and I wasn't sure how that fitted together with games.

Avery Alder's Brave Sparrow is one of the games that showed me how poetry and games (and magic!) could go together.  Brave Sparrow is a game for one, and a pervasive game: it's something you play continuously in your daily life. In Brave Sparrow, you are a sparrow who has lost their wings, and you are working in a sparrow underground to recover them. It has all the main parts of a game: there's a back story, items to collect, missions to undertake, a win condition. It's only around 2000 words of rules, but everything is there to make it a game. And yet it is also completely unlike any other game I'd read before.

The first thing that I loved about Brave Sparrow was that it felt like reading the game was also a way to play it. I've played a good few roleplaying games, but I've downloaded the pdfs of many more, reading the rules, imagining what it would be like to play them. Sometimes I grieve for all the lost games, the games that were abandoned right after the character sheets got filled out, the gamebooks stuck at the back of the shelf. But Brave Sparrow isn't like that: when I read it, a world and a character unfolded in my mind, played all the way from opening montage to final confrontation. Even without beginning to play the game in the world, something in my mind was changing.

The second thing that I loved about Brave Sparrow was its impossibility. It seemed like it would be very hard to play. I don't want to spoil anything about it, but there are certain challenges in accomplishing the goals the game sets for you that make it difficult to imagine how you might win. Difficult but, crucially, not impossible. Not without a little magic, anyway. In that way it reminded me of the kind of absurdist games you'd find in the Fluxus Workbook or Yoko Ono's Grapefruit: games where the fun was trying and failing to imagine how you'd play. But there was something else, too.

"It’s important to sincerely imagine impossible things, to develop empathy towards impossible creatures, to practice being impossible. When we learn to see ourselves in the fantastical, the impossible, the absurd — when we construct new lenses by which to understand our own power and identities — we also put forward a challenge to the world around us."

"Practising being impossible" — that's what magic is. It's putting words and actions in the right order so that a change happens in your mind, your body, your world. Which is also, I think, another way of describing "playing a game".

I started using the word "gamepoem" to describe this kind of writing and playing. I started making up games to play (or fail to play) while I was walking around a city or beneath a mountain. I still do this compulsively, making up strange and small sets of rules to make being in the world a bit more magical. But I'm also thinking about how to bring the approach of a game-poem-spell into different kinds of writing.

How can we bring the magic of a poem into a videogame? When I'm playing a game, often I'm controlling a character who isn't quite me, in a world that isn't quite mine. Sometimes the gap between me and the screen feels too big to cross, and the magic doesn't happen. But even in the biggest, most dramatic game, sometimes there's a moment for a spell, or a poem. When I'm writing, what I try to do is put words in an order that will come out of the screen, into your mind, and make a little change. That's a practice I carry with me.

I'm also still practising how to be a brave sparrow. 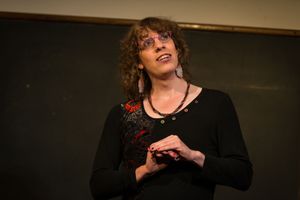